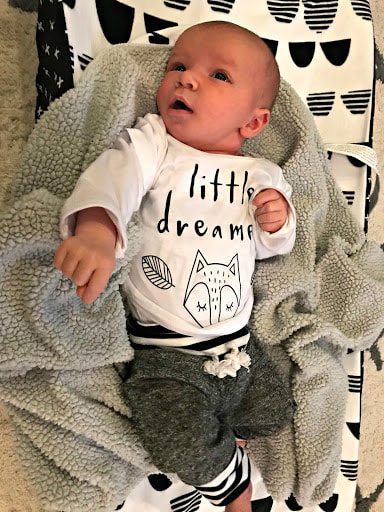 Brother to Brock, Brodie, and Braxton

Briggs, almost 3 months old was the youngest of four boys. He was just a healthy boy and just developed a little giggle that was so contagious! He was just ‘perfect’, from his health to every little physical characteristic. He brought so much LOVE to our family of all boys.

It was a Thursday January 18th, 2018 to be exact. I had been on maternity leave for almost 12 weeks and had been scheduled to go back to work the following Wednesday. Our daycare provider wanted to get used to watching Briggs and learn his cries, and get familiar with him before I returned to work. So we woke up a little earlier than normal that day. Briggs ate like normal (his daddy’s appetite). After feeding him we practiced his giggles on the floor in his bedroom with his big brother Braxton (age 2) and he just created so much LOVE for us that morning, just like he did every day. Like every other morning Briggs sat and smiled in his bouncy chair while being soothed from the sound of my quick 2 minute shower. As I continued to get ready for the day he just sat and watched me with hugs, kisses, and little giggles in between. I loaded the boys up in the car around 9 am and headed to daycare.

About 12:30 my cellphone started ringing. It was our daycare provider. She normally never called me unless Braxton (2 year old) was sick, otherwise it was always a text. In that moment, my whole world stopped. My heart sunk to my toes as she yelled “Melissa, Briggs is not breathing”. I literately dropped everything I was doing and just ran to my car. I felt like I was punched in the chest and couldn’t breathe. I called my husband while I sped off. When he answered I just yelled “Briggs isn’t breathing; I know nothing else, just get in car and meet me at the ER”. I arrived at the Emergency room before Briggs and medics. As I ran into the ER, I was immediately taken into a room and they just prayed with me while we waited for Briggs to arrive in the ambulance. I knew this wasn’t right, I knew this wasn’t normal practice, I knew I was being prepared for the unimaginable before Briggs arrived. It felt like hours had passed, which was actually minutes. Then I was taken back to the trauma room. What I experienced is what you see on TV, not what you imagine being real life. It felt like I was being greeted with a hallway and trauma room lined with angels but were actually medics, doctors, nurses, cops, and more individuals trying to save my baby Briggsee. I just remember running and praying over my baby as they worked on him for a time that felt like eternity. I prayed and prayed and prayed just waiting for the 1 breath to appear on the screen. Reassuring my baby his mommy was right there with him. Then the doctor came to us. It was decision time. In that moment, our hearts were shattered. I just laid and cried over my baby and told him to go fly with the angels. Compressions stopped and I just cried as we prayed. In that tragic moment, there was peace as the nurses in the room wrapped my beautiful baby boy in a blue quilted blanket and handed him to me. I rocked for what felt like hours with Briggs as I just stared at his beautiful face and sang lullabies to him in between prayers. He looked so happy and peaceful. He is now dancing with the angels with the most beautiful wings.